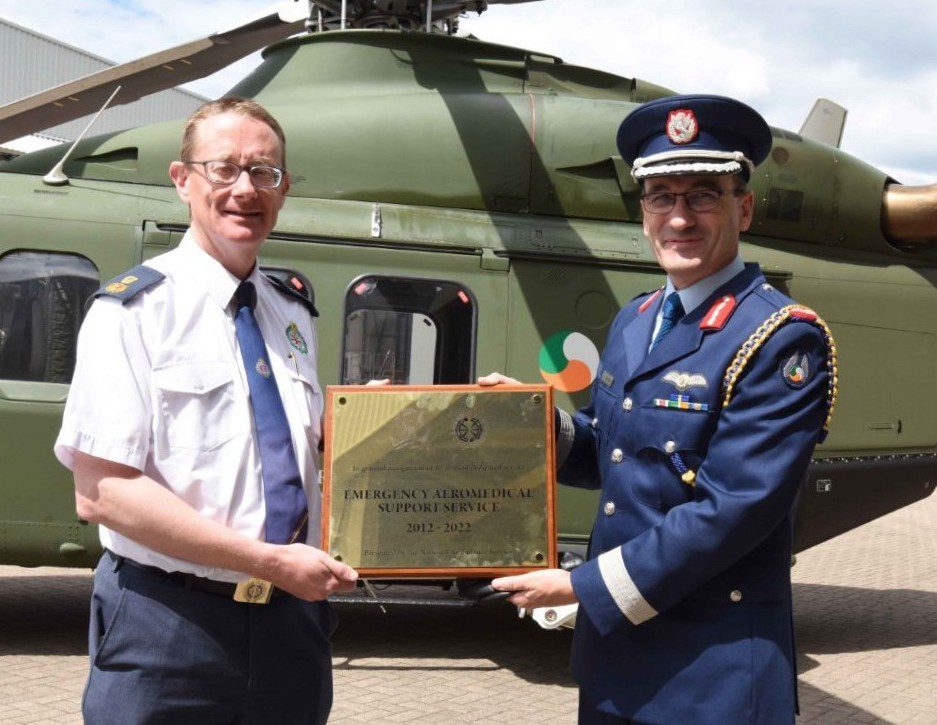 Celebrations were held recently at Baldonnel Aerodrome to mark the 10th anniversary of the Emergency Aeromedical Service, which has become a vital asset in terms of critical pre-hospital care, having completed over 3,500 missions over the last decade.

Initially set up in 2012 for a 12-month trial period, the aim was to assess the level and type of dedicated Helicopter Emergency Medical Service (HEMS) required in Ireland considering the closures of Roscommon Hospital and other regional facilities.

The Emergency Aeromedical Service (EAS), based in Custume Barracks, Athlone, Co. Westmeath, is a joint project between the HSE and the Defence Forces. Air Corps flight crews work alongside National Ambulance Service Advance Paramedics in a dedicated military helicopter for the rapid transfer of critical patients to the most appropriate hospital in the country.

Defence Forces Chief of Staff, Lieutenant General Seán Clancy, and the General Officer Commanding (GOC) Air Corps, Brigadier General Rory O’Connor joined with both serving and retired personnel who worked with the Emergency Aeromedical Service at the celebration alongside several patients and their families who required the services of EAS over the last decade.

Brigadier General Rory O’Connor said: “This service has made an incredible difference to the people of the State. It’s the hard work, dedication and professionalism of the people involved in providing the service that should be acknowledged.”

Prof Cathal O’Donnell, Medical Director of the HSE National Ambulance Service, said that the patient is at the heart of this collaboration. “This is the reason we are doing this and the benefit this collaboration brings to so many people and their families.”